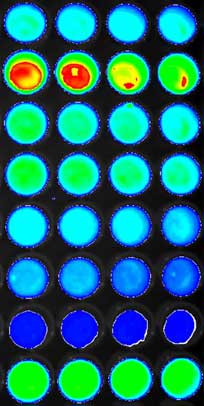 Those cells provide reproducible dose-response curves and accurate determination of in-vitro efficiencies of various chemicals. Bioluminescent in vitro assays allow rapid screening of numerous chemicals in 96 or 384 wells plates such as hormone analogs and are therefore widely used to detect them in human or environmental samples.

Next, their in vivo action can be confirmed in immunodeficient mice in close collaboration with the IPABS platform. After cells xenografting into athymic nude or Scid mice, several ligands for the nuclear receptors can be tested, and different administration protocols can be used in term of dose-response, way of administration and specificity to the compound. Non-invasive monitoring and imaging of tumor cells, through their luciferase gene constitutive expression, are performed in living animals using a CCD camera.
The animals can be imaged daily and allow us to detect the hormonal response after the injections by the chemical products.
Quantitative analysis allows us to compare in vitro and in vivo actions of different compounds in the same cell lines and to follow hormone action on a living animal as a function of time.

By using this approach, the group has been able to assess the oestrogenic and xenobiotic effects of pesticides within the framework of a European contract (Network of Excellence CASCADE) as well as to compare the in vitro and in vivo activities of the ligands of the PPAR gamma receptor (in collaboration with GALDERMA RESEARCH).

Our models which are complementary to the in vitro models already in use in our laboratory, allow specific and sensitive characterization in vivo of the pharmaceutical compounds employed, and also permit to evaluate their potential for future therapeutics treatment of pathologies associated.

The platform is now establishing new cell lines responsing to the histones deacetylases (HDACs). These models, will permit to measure the activity of HDACs inhibitors, which are considered as a new class of anticancer agents and are currently evaluated in several phase I and II clinical trials for several cancers (breast, prostate, etc…).