The lab has a long-standing interest in understanding the interplay between cell architecture (mainly through the role of apical scaffolds), and cell signalling (mainly Notch and Hippo) in the control of growth and cell numbers in epithelial tissues. Our strategy is to first use the model organism Drosophila melanogaster to perform original observations and dissect through the powerful genetic tools available in the fly the mode of action, and then extend our findings to human cancer relevant models such as cancer cell lines or preclinical model models.

We study the role of two neglected PDZ domains containing apical scaffold families, whose human homologues are mis-regulated in cancers: Magi/MAGI and Big-bang/PDZD2. Combining different genetic approaches, proteomic approaches, and detailed cellular phenotypic analyses (mainly through the use of genetic mosaic tissues where wild-type and mutant tissues are found in close proximity in the same organism), we have shown that:

- Bbg in Drosophila, in part through its interaction with Actin remodelers such as Spectrins, promotes both the apical enrichment of cortical F-Actin, and the stabilisation of activated p-Myosin II, leading to increased apical cortical tension. Our studies suggest that this tension, through alternative Hippo signalling, promotes Yki/YAP activity and cell proliferation (Forest et al., J. Cell Biol. 2018).

Human homologues of Magi and Bbg, have been described as potential tumour suppressors, and we are currently exploring the role of these scaffolds during breast and colon cancers. 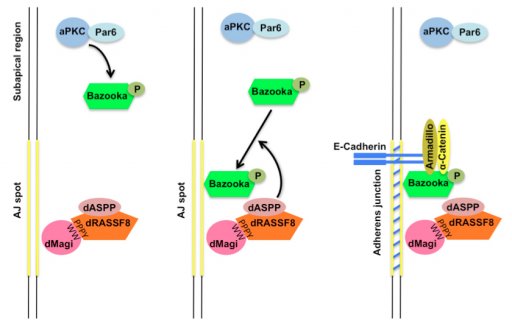 - what metabolic programmes sustain these different modes of overgrowth.