Primary and secondary liver cancer are representing together the 2nd most frequent cause of cancer-related death worldwide, accounting for over 1 million deaths. The most frequent primary type of liver cancer is hepatocellular carcinoma, a rare example of cancer with increasing incidence in the western world. As a secondary cancer, liver is a central dissemination organ for the deadliest malignancies including colorectal, pancreas, lung and breast cancer. The relevance of liver is best seen on the example of colorectal cancer, where over a half of patients die from liver metastases. To date, apart from surgery and in limited number of cases, there are no effective treatments for liver malignancies. Chemotherapy with or without targeted therapy leads in most of the cases to tumor resistance and progression.

Our team aims to contribute in the fight against primary and secondary liver malignancies mainly through two projects:

1. Role of Cancer Cell-Mediated Programing of Fibroblasts from Defensive to Collaborative Phenotype in Therapy Resistance of Liver Metastases

The present project aims to examine the hypothesis that the aggressive and therapy resistant cancer cells are selected mainly on their ability to switch fibroblasts from defensive to collaborative phenotype. Our approach takes into account that intratumoral heterogeneity has to be considered not only at the cancer cell level but rather in term of “team units” in which the collaborative/resistant fibroblasts play a key symbiotic role. Indeed, a strong line of evidence suggests that anti-tumor fibroblast function is also preserved in advanced tumors. Exemplary for this is the recent finding that metastatic breast cancer cells in contrast to non-aggressive ones secrete IL-1b to inhibit asporin (ASPN) secretion in CAF1. ASPN is a potent inhibitor of TGF-β1, an essential growth factor necessary for EMT and stemness in cancer cells. A microenvironment devoid of ASPN is permissive to uncontrolled tumor growth and signifies worst prognosis in breast cancer patients. This example shows that identifying and blocking molecules that cause the fibroblasts programming to support cancer cells might represent a promising strategy to abrogate therapy-induced resistance and help eradicate the tumor. Encouraged by the previous works in the field of tumor heterogeneity2 and microenvironment1 we aim to explore cancer cell-CAF dialogue in colorectal cancer liver metastases. We combine for the first time a novel tissue sampling approach with a Patient-Derived Tumor Explant model. The innovative setup allows a unique insight into the cancer – stroma ‘cross-talk’ following tumor resistance to standard of care treatments. Comprehensive “omics” analysis (RNA sequencing, proteomics and bioinformatics) and functional studies synergize to identify proteins that are key to this process.

Figure 1: The new concept of tumor heterogeneity: the smallest “unit” consists of cancer cell/CAF pair that engage in direct and bystander crosstalk (not shown). Represented are two opposite cases where CAF can display defensive or collaborative phenotype, however the transition between these two states is continuous.

Today, there is no effective treatment to eradicate HCC. The majority of clinical trials are  conducted with therapies that have not been specifically tailored for HCC and which already showed only modest success in other types of tumors. These include mainly two classes of compounds: 1) VEGFR/ broad RTK (receptor tyrosine kinase) inhibitors (e.g. Sorafenib, Regorafenib and Nintedanib) and 2) c-MET (hepatocyte growth factor receptor) inhibitors (e.g. MSC2156119J, Tivantinib and INC280). Unfortunately, small molecules do not have the ability to selectively accumulate in tumors and hence a dose-escalation needed for curing cancer is not possible due to increased toxicity. In contrast to this, monoclonal antibodies can achieve good tumor to blood ratios offering a possibility to truly target the tumor. However, only few monoclonal antibodies are included in current trials and are mostly limited to “naked” antibodies that do not have the necessary toxicity to eradicate the tumor. Antibody-drug conjugates (ADC) are potent derivatives of classical antibodies that are able to deliver the required toxic payloads. However these new treatments inevitably require novel targets/ druggable-biomarkers, which will be highly specific for HCC and absent from normal tissues. In the current project we have used previously developed proteomic technologies3,4 to analyse accessible proteins in human hepatocellular carcinoma. The analysis led to a discovery of a set of novel candidate biomarkers for toxic antibody-based targeting. We are currently functionally analysing these proteins in order to clarify their role in HCC progression and aim to raise monoclonal antibodies against most promising candidates. 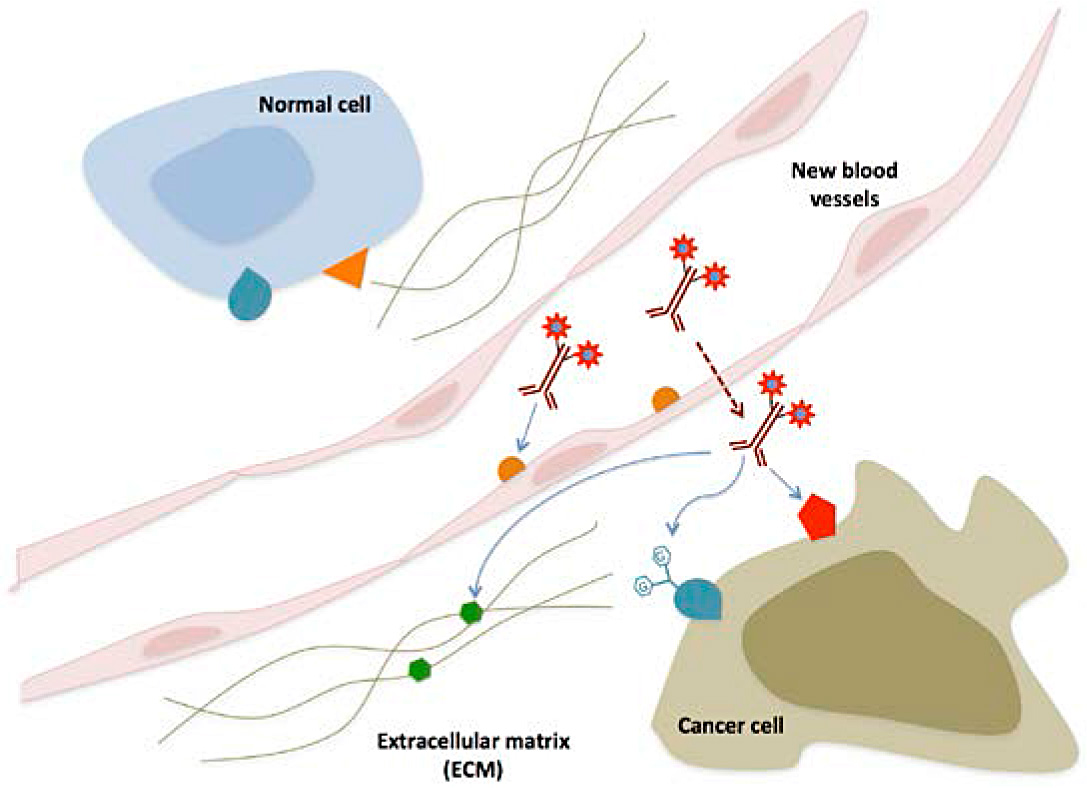 Figure 2 : Targeting accessible cancer protein in solid tumors. The systemically injected antibodies are carrying toxic payloads (e.g. β-particle emitters) while accumulating preferentially at the tumor site. They are able to recognise tumor specific proteins that are found either/or on the cancer cell itself or in the extra cellular matrix (ECM) including tumor neo-vasculature.