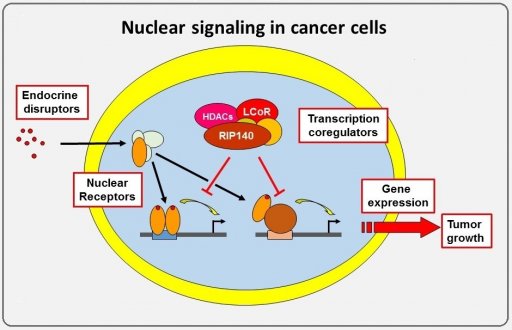 A- Role of RIP140 in physiopathology

Role in intestinal homeostasis and tumorigenesis. In the normal gut, activation of signaling pathways such as the Wnt pathway regulates the proliferation, differentiation and renewal of the intestinal epithelium. In colorectal cancer, deregulation of these cellular circuitries is an important consequence of the APC tumor suppressor gene dysfunction and genetic and molecular data have established the importance of this pathway in the development of colorectal cancer.

Using loss and gain of function mouse models, we showed that the transcriptional coregulator RIP140 inhibits the proliferation and apoptosis of intestinal epithelial cells. As a consequence, RIP140 reduces the regeneration of the intestinal epithelium following whole body irradiation. RIP140 also strongly represses human colon cancer cell proliferation in vitro and when grafted onto nude mice. Moreover, both in mice tissues and in human cancer cells, RIP140 stimulates APC gene transcription and, as a result, reduces β-catenin activation and Wnt target gene expression. Finally, RIP140 mRNA and protein levels are reduced in colon cancer biopsies as compared to normal tissue, and tumors with a high RIP140 gene expression specify patients with the best survival rates. Altogether, these results identify, for the first time, the tumor suppressor role of RIP140 in colon cancer and its potential as a new biomarker in oncology (Lapierre et al., J Clin Invest, 2014). These data are supported by a recent study comparing the expression and correlation with survival in colon and gastric cancers which highlighted an overexpression and a poor prognosis value of RIP140 expression in gastric cancer (Triki et al., Oncotarget, 2017).

By combining in vivo and in vitro approaches, we also demonstrated the involvement of RIP140 in the control of DNA repair in intestinal epithelial cells. Our unpublished results showed an upregulation of MMR gene expression by RIP140 and the existence of a mutation in the coding sequence of the RIP140 gene leading to the expression of a truncated RIP140 protein. Based on these results, our hypothesis is that inactivation of RIP140 leads to a decreased expression of MMR genes and affect MMR activity, thereby promoting tumorigenesis. We are currently trying to validate this hypothesis by gene sequencing in tumors of patients without MMR gene mutations (Palassin et al, in preparation). 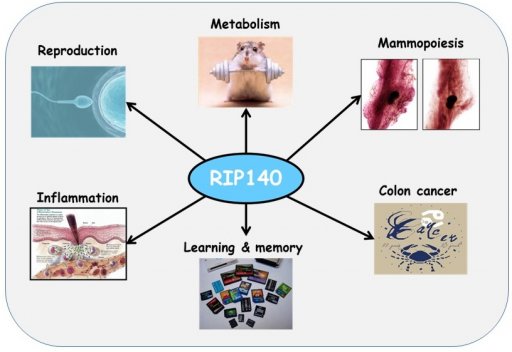 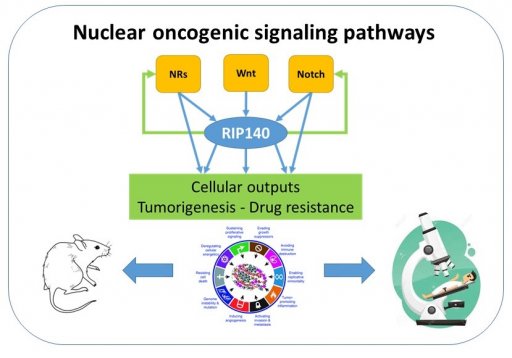 Expression and role in gynecologic cancers. We previously defined the role of RIP140 on the E2F signaling pathway in breast cancer cells and demonstrated that its expression was inversely correlated with a signature of E2F1-target genes and discriminated breast cancer subtypes (Docquier et al 2010, 2012 & 2013). More recently, we demonstrated the role of RIP140 in the control of LCoR activity, both in the regulation of gene expression and in the control of cell proliferation. LCoR was isolated through its interaction with ERα [38] and exhibits high similarities with RIP140 in terms of biological properties. In this study, we demonstrated that LCoR interacts with RIP140 via its Helix Turn Helix (HTH) domain and has a high potential to inhibit breast cancer cell proliferation which depends on RIP140 expression (Jalaguier et al., Oncogene, 2017). In collaboration with the University of Munich, we evidenced the prognosis value of the two proteins in breast cancers, highlighting the importance of their subcellular localization (Sixou et al, Trans. Oncol, 2018). We also demonstrated the correlation of their expression with bad prognosis in cervix cancers (Vattai et al, Oncotarget 2017).

RIP140 is known to act as a major regulator of cell metabolism and we further characterized its role in glucose metabolism in cancer cell. Our unpublished results show that the loss of RIP140 expression in immortalized or transformed murine embryonic fibroblasts (MEFs) induces an increase in cell proliferation, tumor growth, and a dependence on glycolysis. Our unpublished results suggest that the effects of RIP140 on glucose metabolism in breast cancer cells involve, at least in part, the regulation of the expression of genes such as GLUT1-3 and G6PD (Jacquier et al, in preparation).

B- Study of other transcriptional coregulators

Role of SENP2 in ER signaling. Previous work described the modification of ERα by SUMO and its effect on the receptor transcriptional activity. To further investigate the role of sumoylation in estrogen signaling, we studied the role of the different SUMO proteases or SENPs (Sentrin protease) on ER-dependent transactivation. We showed that SENP2 interacted with ERα and strongly repressed its activity. We evidenced an intrinsic autonomous repressive domain in SENP2, independent of its catalytic activity. Finally, using both overexpression and knock-down strategies, we showed that SENP2 robustly repressed estradiol-induced proliferation of MCF7 cells (Nait Achour et al., 2014).

HDAC9 in breast cancer cells. We previously underlined the role of histone deacetylases (HDACs) in breast tumor progression and their interactions with estrogen signaling (Margueron et al 2004, Duong et al 2006 & 2008, Linares et al 2011). We found HDAC9 to be differentially expressed in ERα+ and ERα– cells and associated to basal characteristics of the breast tumor cells. Using breast cancer cells harboring HDAC9 overexpression or silencing, we observed that this particular HDAC enhanced cell proliferation, probably through down regulation of p21 gene expression. Moreover, HDAC9 overexpression was associated with resistance to HDIs antiproliferative effects and interestingly to resistance to the antiestrogenic effects of OHTam. Altogether, our results point for the first time to the role of HDAC9 in mammary tumorigenesis and estrogen response (Lapierre et al, 2017; Linares et al., submitted).

A- Activation of estrogen signaling by environmental ligands

Nuclear receptors ligands are present in the environment and may explain in part the increased cancer incidence. Since most endocrine disruptors (EDs) are structurally unrelated to natural hormones, their modes of binding to nuclear receptors and their biological role are difficult to predict. We carried out a correlative analysis of the structural and functional data in order to decipher the mechanisms by which EDs with different chemical structures bind to ERα and ERß and activate these nuclear receptors. The results indicate that the binding of these EDs to receptors involve a wide range of protein-ligand interactions, reflecting differences in binding affinities, specificities, and their activities (Delfosse et al Environ Health Perspect. 2014).

The zebrafish (Danio rerio) is increasingly used as an animal model to study the effects of environmental pharmaceuticals and estrogens. We established HeLa cell lines containing a luciferase reporter gene under the control of the 3 zebrafish estrogen receptors (zfERs) and showed significant differences in the ability of estrogen agonists and antagonists to modulate the activation of the three zfER isotypes relative to their effects on human receptors. This work thus emphasizes that it is necessary to be attentive when transposing the results obtained by using zebrafish as a model of human pathophysiology (Grimaldi et al., 2015; Pinto et al. Toxicol Appl Pharmacol. 2014; Pinto et al, in preparation). 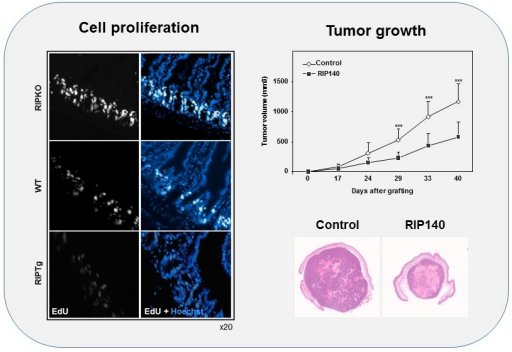 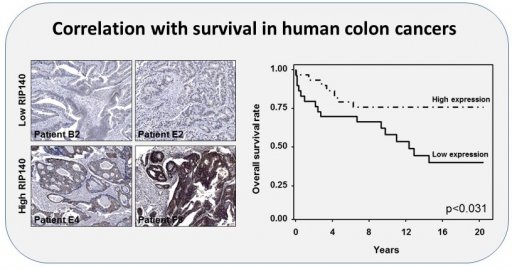 B- Activation of the nuclear receptor PXR

Many of the EDs are suspected to have deleterious effects on human health, and their combination in complex mixtures may exacerbate these effects. In addition to ERs, another targets of EDs is the pregnane X receptor (PXR) (Creusot et al, in preparation). PXR plays a critical role in the control of detoxifying enzymes and transporters regulating liver and gastrointestinal drug metabolism and clearance. PXR is also widely expressed in many different tissues and tumours where it is involved in both the development of multidrug resistance and enhanced cancer cells aggressiveness.

In order to facilitate the identification of molecules capable of modulating PXR receptor activity from environmental samples, we have developed an affinity column with recombinant human PXR immobilized on a solid support. Analysis of an environmental sample using this affinity column demonstrated that the PXR receptor had ligands common with estrogen, androgens and dioxin receptors (Dagnino et al. Environ Toxicol. 2014).

Using structural and cellular techniques, we have characterized the interaction of EDs with PXR. We have shown that this receptor has different modes of binding of environmental ligands including covalent binding (Delfosse et al in preparation). We also demonstrated for the first time that a molecule of pharmaceutical origin with estrogenic activity (17α-ethinylestradiol or EE2) and an organochlorine pesticide (trans-nonachlor or TNC), both having a low efficiency when tested separately, are able to bind cooperatively to the PXR nuclear receptor and lead to synergistic activation of its transcriptional activation activity. Various biophysical approaches demonstrated that each ligand enhances the binding affinity of the other molecule, so that the binary mixture induces a significant biological response at doses where each chemical is individually inactive. The three-dimensional structures obtained by high-resolution crystallography revealed the structural basis of this cooperativity (Delfosse et al Nat Commun. 2015). Furthermore using a large screening of EDs, we have also discovered that several other EDs are able to bind in combination to PXR (Gardia Parege et al in preparation). These results suggest that the formation of "supramolecular ligands" at the nuclear receptor ligand binding pocket contributes to the effect of chemical mixtures that may have strong implications in the field of endocrine toxicology and disruption.