The team has unpublished data indicating that of the co-expression of two RTKs belonging to distinct signaling pathways mark a subpopulation enriched in TIC/CSC in TNBC. These preliminary results open interesting perspectives both at the mechanistic and therapeutic levels. Indeed, it will be most interesting to understand how the co-expression of these two RTKs impacts on TNBC stem cell phenotype and unravel the signaling which underlies this. We will also determine whether these RTKs physically and/or functionally interact (which has not been reported yet) and whether third party RTKs are at play. Intimate knowledge on the regulatory and underlying signaling is expected to lead to novel anti-CSC strategies. We already dispose of in house produced human antibodies against these RTKS and aim at developing CSC targeted therapeutic tools. The capacity to specifically target the CSC/TIC subpopulation in TNBC is indeed of major importance, since CSCs/TICs are the seeds of recurrence and , often considered as responsible of the “resistance” to treatments and of the recurrence post-treatmentsand are selected and amplified by many classical chemotherapies.

TNBC and high grade ovarian cancer (HGOC) share an elevated prevalence (30 to 35%) of BRCA1 loss of function, either through a coding mutation or inactivation by DNA hypermethylation of the promoter.  BRCA1 is a major player in homologous recombination-mediated DNA repair (HRR) and its deficiency results in repair deficiencies. As a consequence, BRCA1-defective cancer cells show elevated sensitivity to platinum salts and PARP inhibitors, but resistance is frequent. Recent evidence revealed the essential role of BRCA1 in the resolution of replication stress, opening new therapeutic perspectives for BRCA-defective cancers.

Our preliminary results show that BRCA1-defective cell lines show exquisite sensitivity to combined treatment of Gemcitabine and CHK1 inhibitors (such as PF477736), which acted synergistically. We noted that low doses of CHK1i (IC10) allowed to reduce efficient Gemcitabine concentrations by a factor 5 to 10. These observations are in line with the idea that massive replication stress induction could be a potent therapeutic approach in BRCA-deficient cancer. Further drug combinations aiming at replication stress induction will be tested including other CHK1i, ATRi and inhibitors of early steps of mitochondrial pyrimidine metabolism.

However, this approach is less effective in BRCA-proficient tumors, leading us to explore ways to interfere with the BRCA pathway and induce pharmacological BRCA-deficiency. S phase Cyclin-dependent kinases CDK1/2 have been shown to activate BRCA1 by phosphorylation. Thus, inhibiting BRCA1 phosphorylation by CDK1/2 could impact on BRCA1 activity and proficiency.  Many small-molecule CDK inhibitors (CDKi) were developed as potential anti-cancer drugs, but early clinical trials had only limited success due to toxicity. We propose that pharmacological CDK activity modulation using lower dose of inhibitors could have unexploited therapeutic potential, as part of combination therapies. This aim is developed in close collaboration with D Fisher’s lab at IGMM (CNRS, Montpellier). 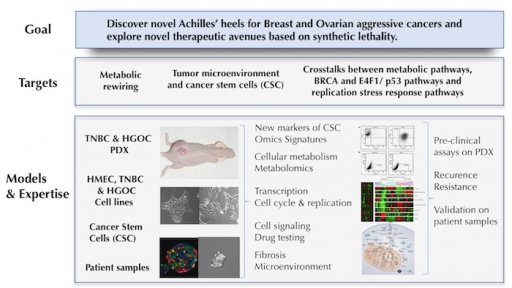 It is known that cancer cells reprogram their metabolism to fuel unleashed proliferation and growth. Mitochondria are central energy factories that produce fundamental cellular components, including fatty acids, amino acids, and nucleotides. Pharmacological inhibition of mitochondrial metabolism has emerged as a potential therapeutic strategy in cancer. Based on previous work on E4F1 transcriptional regulation we have identified cancer cell metabolic weaknesses (Rodier et al, 2015, Arnould et al 2017) which may be interesting leads for future therapeutic strategies in TNBC.

Target jointly DHODH and replication checkpoint to optimize the response.

We are currently extending this work to other DHODH and CHK1 inhibitors with the aim to identify the combination showing the highest efficiency at the lowest dose in order to optimize the efficiency/toxicity ratio. As part of this we have initiated collaborations with PO Vidalain and YL Janin, Pasteur Institute and ASLAN Ltd (Singapour) for other DHODH inhibitors. Based on recently reported effects of DHODH inhibition on Acute Myeloid Leukemia recurrence (Sykes et al, 2016), we are also investigating the impact of these combinations on TNBC CSCs.

(2) We noted that the level of metabolic and redox alterations in E4F1 KO cells varied according to the p53 status [Hatchi et al, 2011, Rodier et al 2015] and that these alterations were strongly attenuated by the p53 target gene Aldh4/P5CDH (mitochondrial dehydrogenase involved in proline catabolism) (Zeroual et al, Ms in preparation).

This prompted our interest for the proline cycle in cancer cells. Recent works have shown that amino acids can act as alternatives to glucose to support cancer cell proliferation and survival. Glutamine is the most consumed amino acid by cancer cells, but proline can also be used as a fuel. Both aa can support nucleotide, lipid and glutamate biosynthesis and be converted into alpha-ketoglutarate and feed the tricarboxylic (TCA) cycle. Hence, proline and glutamine metabolism, TCA cycle, urea cycle and nucleotide synthesis are closely related pathways playing key roles in cancer metabolic reprogramming. Proline to glutamate conversion is driven by 4 enzymes, among which PRODH/POX and P5CDH/ALDH4A1, whose genes are direct transcriptional targets of p53 and are expressed at lower levels in a variety of p53-mutated human tumors.

The role of the "Proline cycle" in cancer is poorly documented and our project aims at exploring how alteration of proline biosynthesis and catabolism can impact on TNBC. Our results indicate that this step is deregulated in p53-deficient TNBC cells and impacts cell fate and behaviors, including anchorage-independent growth. Moreover, transcriptome analyses show that several enzymes of the Proline cycle are either strongly down or up-regulated depending on the stage of transformation and differentiation (mesenchymal vs. epithelial). These data suggest that proline catabolism could act as a tumor suppressor pathway in breast cancer, an hypothesis further supported by the correlation with the bad prognosis of reduced mRNA levels of P5CDH/ALDH4A1 and PRODH/POX in TNBC. Overall, we hypothesize that the down-regulation of the proline degradation pathway could be a key event in the development of the most aggressive TNBC breast tumors.